Faculty of ForestryERDELab - The Energy Resources, Development and Environment Laboratory

Rethinking Ujjwala through the lens of behavioral science

Hello, everyone. This is my first blog post in the ERDE lab!

Shreerupa and I wrote an article discussing the nuances of Ujjwala from behavioral sciences perspective and why it is not comparable to the rural adoption of mobile phone and vaccines. A heavily edited version was published in the print editions of Hindustan Times-HT (3 April 2018).

Disclaimer: We did not decide the HT headline! Also, the article was meant to be read while referring to a table. 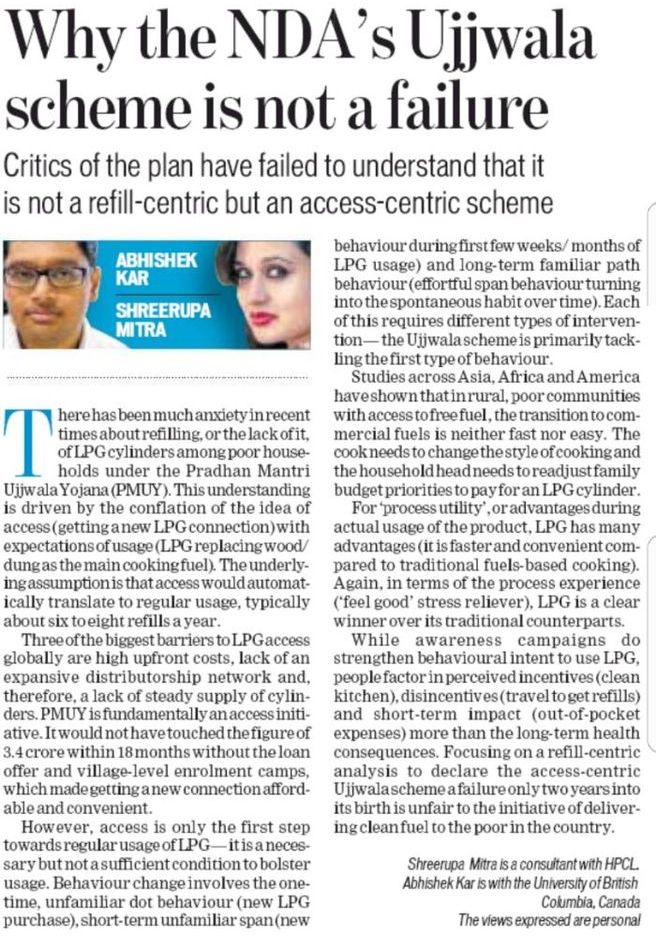 Please read the extended version of the article below (co-authored with Shreerupa).

There has been much anxiety in recent times about refilling, or the lack of it, of LPG cylinders among poor households under the Pradhan Mantri Ujjwala Yojana (PMUY). This understanding is driven by the conflation of the idea of access (getting a new LPG connection) with expectations of usage (LPG replacing wood/ dung as the main cooking fuel). The underlying assumption is that access would automatically translate to regular usage, typically about six to eight refills annually. We argue that the factors that drive access and the ones that push up usage of LPG are different from the lens of behavioral sciences.

Three of the biggest barriers to LPG access globally are high upfront costs, lack of an expansive distributorship network and, therefore, a lack of steady supply of cylinders. Extending of loans with a concurrent opening of new outlets are textbook examples of how to enhance access. PMUY is fundamentally an access initiative— it was designed to be a vehicle to reach out to millions who aspired for an LPG stove but could not afford the upfront cost associated with it. It would not have touched the 3.4 crore number within 18 months without the loan offer and village-level enrolment camps which made getting a new connection affordable and convenient.

However, access is only the first step towards regular usage of LPG– it is a necessary but not a sufficient condition to bolster usage. Regular LPG usage involves getting new connection/ LPG stove (one time), purchase refills (periodic) and use the cylinder two to three times a day to cook (continuous). Each of this requires different types of intervention (or, triggers)—the Ujjwala scheme is primarily tackling the first type of behavior.

Studies across Asia, Africa, and Latin America have shown that in rural, poor communities with access to free fuel (wood, dung, crop residues), the transition to commercial fuels is neither fast nor easy. The cook needs to change the style of cooking (faster cooking in LPG requires more attention than slow cooking in wood fire), the household head (often, a male member) needs to re-adjust family budget priorities to pay for an LPG cylinder and the family has to adjust to real/ perceived changes in taste and texture of the cooked food.

Consider this table where we compare five products/ behaviors: 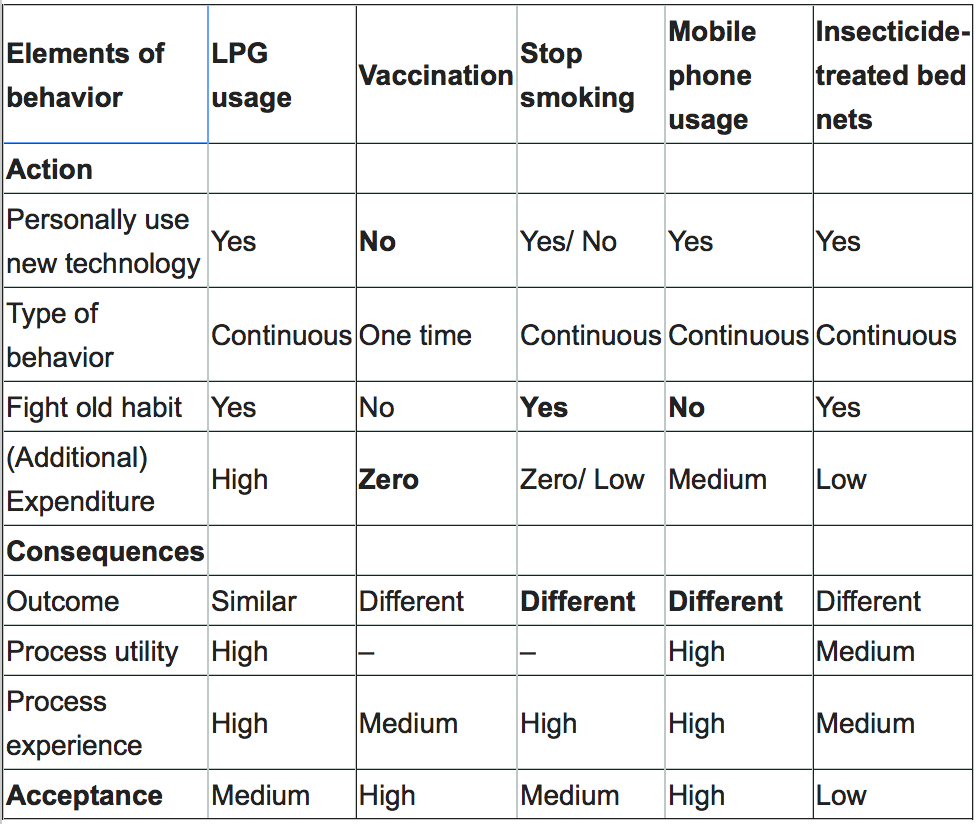 To compare LPG usage with insecticide-treated bed nets: both are repetitive actions rather than a one-time action, say, as for some types of vaccination. They both require fighting an old habit and to incur additional costs (higher, in the case of LPG and low in case of mosquito nets). Here, there is another distinction–bed nets are, usually, a one-time purchase while LPG is a repeat purchase.

We also distinguish tangible gains/ losses between outcome (the consequence of the action) and processes (while performing the action). We also add on the aspect of experience (feel good/ feel bad while performing the action) as behavioral science shows that human action cannot be predicted through the prism of rational assessment of gains and losses–it is impacted by heuristics, biases, anomalies, mood and past habits.

The tangible outcome for LPG and traditional fuels’ usage is similar (hot food) while the outcomes are different for when a bed net is used (no mosquito bites) and when it is not used. For ‘process utility’, or advantages during actual usage of the product, LPG has many advantages (it is faster and convenient compared to traditional fuels’-based cooking). Again, in terms of the process experience (‘feel good’ stress reliever), LPG is a clear winner over its traditional counterparts. Process experience is also high for smoking, though the output (lung cancer, for instance) is mostly dreadful. This stands in contrast with, say, the usage of mobile phones whose utility has unmatched benefits (watch movies, chat with friends) compared to a time when the consumer was without a cell phone.

While awareness campaigns do strengthen behavioral intent to use LPG, people factor in perceived incentives (clean kitchen), dis-incentives (travel to get refills) and short-term impact (out-of-pocket expenses) more than the long-term health consequences of avoiding lung and heart diseases when making a quick cost-benefit analysis of buying an LPG cylinder.

The poor, often, earn & spend on a daily or weekly basis—as such, shampoo sachets or small biscuit packets respond to their economic reality. Unless a micro-finance scheme is able to cover the refill purchase, the affordability problem would stifle usage numbers. Scholars, like Kirk Smith, have argued for “smart subsidies” to increase usage where the poorest decile class would be given a subsidy which would make their expenditure on cooking fuel less than five percent of their total monthly expenditure.

Also, there are seasonal disincentives to using LPG, such as heating energy demands (mud stoves provide heating in winter) and solid fuel abundance (surplus crop residue during harvest season)–functions that cannot be met using an LPG. These combine with dips in cash flow for families who are dependent on agricultural income. During such seasons, the household head may have to reallocate current consumption expenses and women’s free labor becomes a cheaper option. So, it is not a surprise that even the richest 10 percent of India’s rural households (most with access to LPG) depend on solid fuels to meet more than 50 percent of their cooking energy demand— a phenomenon known as cooking technology stacking. Therefore, the presence of both a mud stove and an LPG in a household does not imply that the access-focused scheme has failed.

Focusing on a refill-centric analysis to declare the access centric Ujjwala scheme a failure less than two years into its birth is unfair to the initiative of delivering clean fuel to the poor in the country.

P.S.: Shreerupa writes on the UN, WTO, oil politics and energy. She is also a consultant with HPCL.